On October 3rd The Executive Director of Witness to Innocence, Kirk Bloodsworth, visited the Upper School to speak about his work to support people who have recently been exonerated and to abolish the death penalty. Bloodsworth is the first American sentenced to death to be exonerated post-conviction by DNA testing.  Following is the Assembly Introduction presented by Seniors Katie Ludwig and Lexi Reddrick.  Both students are in Ms. Cullen's Comparative Legal Systems class. 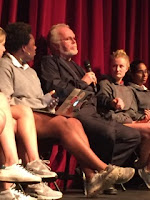 "In 1984 Kirk Bloodsworth, a Maryland resident from the Eastern Shore, was arrested for a crime that he did not commit: the rape and murder of a nine-year-old Rosedale girl, Dawn Hamilton. Although he knew that he was innocent and believed he would be exonerated, Mr. Bloodsworth was tried, convicted, and sentenced to death. While in prison, he learned about the new forensic breakthrough, DNA testing. A few years later, in 1992, he was finally, through his and his lawyers’ efforts, able to persuade prosecutors to test DNA evidence collected at the crime scene, knowing that he was innocent, and hoping to prove it. The tests proved his innocence, and he was released from prison in 1993 after spending 9 years in prison, wrongfully incarcerated.  Mr. Bloodsworth was the first person ever in the U.S. to be exonerated from death row based on DNA testing.

Now, Mr. Bloodsworth has discovered a new passion: silversmithing. He makes an 'exoneree ring', which he plans to give to all 351 Americans who went through what he did. 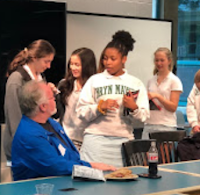 Mr. Bloodsworth has devoted himself to abolishing the death penalty; he has worked with eight out of the nine states, including Maryland, that have abolished the death penalty in the last 25 years.  He has also been featured on CNN’s Larry King Live, and twice on the Oprah Winfrey Show, to share his story, and he has testified before Congress. 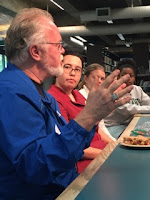 Mr. Bloodsworth is a supporter of the Innocence Protection Act, which aims to reduce the risk of executing innocent people. The Act established the Kirk Bloodsworth Post-Conviction DNA Testing Program to help states lower the costs of testing DNA evidence after conviction. The Act was signed into law in 2004 and Mr. Bloodsworth fought to ensure that the program was fully funded.  Today it provides $10 million per year in federal grants.

Mr. Bloodsworth is currently the Executive Director of Witness to Innocence, where he advocates for the abolishment of the death penalty and educates people about wrongful conviction.  He is the first death row exoneree to join the board, and before being named as Executive Director, he served on the board as the director of communications, deputy director, and interim executive director.


Mr. Bloodsworth is the subject of the book that many students read for summer reading, Bloodsworth:  The True Story of the First Death Row Inmate Exonerated by DNA Evidence." Mr. Bloodsworth joined Ms. Cullen’s Comparative Legal Systems class to discuss his views and experiences, then observed Ms. Eisler’s 11th Grade English class, who responded to writing prompts based on Bloodsworth. He answered questions and signed books during lunchtime, and then answered questions for the entire Upper School during Community Time.  Gilman, Roland Park, and Bryn Mawr students from Comparative Legal Systems class joined him on stage and  asked him questions they created.  Mr. Bloodsworth received a standing ovation!

Posted by BMS Librarian at 6:48 PM